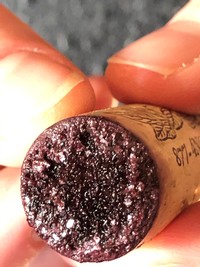 What are Wine Diamonds?

Our wines at Vino Noceto will more than likley develope tartrates in the bottle. Rusty borrwed this artcile from Scott Harvey to share with you. This article does a wonderful job explaining the formation of tartrates (wine crystals) in wine and the resulting effects. It was written by Scott Harveys  mentor, Dr. Richard Peterson and Rusty also trained under and worked for Scott for the 1st 15 years of my carrer, before moving to Vino Noceto 21 years ago. Dr. Peterson is one of California’s most respected winemakers and has made many contributions to the wine industry.  He invented the Peterson steel barrel rack, giving the technology to the wine industry with no financial gain to himself.  Well over 90% of all barrels today are stored on Peterson barrel racks.  He has been the head winemaker for wineries such as, Gallo, Beaulieu Vineyards, Monterey Vineyards, Atlas Peak. The article is titled:

HOW’D THEY GET THOSE CRYSTALS IN WITH THE WINE?

The crystals on the cork aren’t red diamonds — we couldn't sell the wine at this price if they were -- neither are they red glass, chemicals or anything dangerous at all.  They are pure, natural CREAM OF TARTAR crystals: the same cream of tartar that you use in cooking!  They sometimes appear inside a bottle of wine after storage, especially cool storage.  BUT, ONLY IN FINE WINES!  They have a slightly sour taste, and —because they don’t dissolve very fast in your mouth—they’re really more “gritty” than anything else.

Tartaric acid is quite rare in nature, yet it is the major organic acid which occurs naturally in grapes.  With one exception (Tamarind), grapes are the only economically significant fruit crop to contain relatively high concentrations of tartaric acid!  Grapes are also naturally rich in potassium and as good as that is from a health standpoint, it often leads directly to unsightly crystal formation in fine wines.  For, whenever you have potassium and tartaric acid together in solution, they quickly figure out how to become potassium bitartrate—the scientific name for cream of tartar — which then crystalizes out.  Since cream of tartar is even less soluble when cold than warm, chilling the wine increases crystal formation.  (You sometimes find that a bottle of wine looks okay in the store, but in your refrigerator a crystalline sediment of cream of tartar may form in the bottle.)

Cream of tartar is certainly not harmful, but the American consumer has been conditioned to suspect any product with sediment, especially wine, and is inclined to discriminate against such products.  Wineries therefore often chill new wines to just above the freezing point (around 23 degrees F.) at which time the crystals form and settle to the bottom of the tank.  The wine is then racked or filtered while still cold to insure that the cream of tartar crystals are removed, no matter how small they might be.  Then, after the wine is bottled, the consumer can chill the wine for serving without fear of new crystals forming.  This process, called cold stabilization of white wines, is usually routine in all fine wine regions of the world since crystal removal doesn’t affect the taste of white wines.

Not so with red wines.  Chilling reds may cause pigments, tannins, and other components of wine “body” to drop out (along with the cream of tartar); the resulting wine has "lost something" and just isn’t as good as before.  We don’t chill our red wines for this reason.

Do you think we should?  Rusty Folena, having been European trained, makes the Vino Noceto wines in the “Old World Style”.  They tend to have higher natural acidity.  Thus, there’s a greater chance to see crystals in our wines than in those wines produced more in the “New World Style”.  Will the consumer know that only the finest wines can form crystals*--- and learn to accept them (decanting the wine)?  Or, will we be forced to cold stabilize and run the risk of reducing some wine to mediocrity?  Only you can tell us.

* Lesser wines always have lower natural acidity;  too low for any excess to crystalize out of solution.  They CAN’T produce crystals.